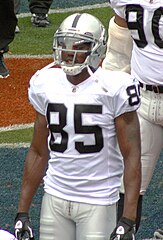 Players in the National Football League often find themselves on the wrong side of the law. This is nothing new as players from the 40s, 50s and 60s were arrested on an array of different charges.

One of the most common offenses is for driving under the influence (DUI). In the past two weeks three NFL players were arrested on suspected DUI.

Oakland Raiders wide receiver Darrius Heyward-Bey pled not-guilty. This is the first DUI for the 25-year-old football star according to the SF Examiner.

How can he plead not guilty and then have his attorney say things like, “Not that that’s something to be proud of, but this is a good guy. This was an unfortunate incident, and Darrius will do whatever it takes to put this behind him and go forward?”

How about by pleading guilty, since your words indicate he was. Also he needs a California DUI class and maybe a 100 hours of community service. I hate it when they plead not guilty. It is nothing but a posture for reduced sentence.

Heyward-Bey was driving his 2012 Range Rover when pulled over. He was given field sobriety tests, which he failed. Heyward-Bey had a blood-alcohol content of 0.13 following a chemical test; about a half-hour after he was pulled over, a breath test registered at 0.12. How can you plead not guilty?

If convicted he could spend 6 months behind bars.

In 2009, Heyward-Bey was a surprise first-round draft pick, No. 7, and signed a five-year contract with Oakland worth $38 million. Why not just take a taxi?