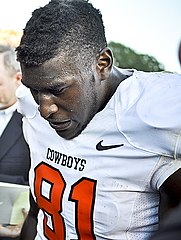 Are players in the national Football League celebrities? Are they role models? If they are, it sure seems like too many of them are modeling poor behavior – namely drinking and driving. The latest Dui offender is Jacksonville Jaguars rookie Justin Blackmon.

For a young man entering into the first stage of their NFL careers, the idea of money, fame, fortune and time on their hands leads to disastrous results.

While Blackmon, the fifth overall selection in April’s NFL draft has mad skills on the field, his decision-making off the field leaves a lot to be desired.

The 22-year-old Blackmon, the player the team had hoped would be part of its rebuilding process at the wide receiver position, was arrested in Stillwater, OK for a DUI and blood-alcohol level of .24, which is three times the legal limit. This according to bleacherreport.com.

I have long been in favor of the NFL requiring all rookies to take alcohol and drug classes. This is the second time in 20 months that the 22-year-old Blackmon has had issues with the law and more specifically, alcohol.

Wide receivers seem to get into more trouble with the law than other position players, and the Oklahoma State All-American is yet another example.

This is the fourth receiver drafted in the first round by the Jaguars (R. Jay Soward, Reggie Williams, Matt Jones and now Blackmon), who have had off-field character issues.

Blackmon was previously arrested in October 2010 on a Class C misdemeanor DUI charge. In that incident, Blackmon, then in college at Oklahoma State, was arrested at 3:45 a.m. He was driving 92 in a 60-mph zone.

Blackmon could be entered into the NFL’s Stage One Intervention Program that includes an evaluation, a possible treatment plan and random testing.

After his first arrest, Blackmon was humbled and apologized unreservedly for his actions and promised they would not be repeated. It appears his intentions were good, but may need professional help with his issues. An Oklahoma DUI class is a good start.