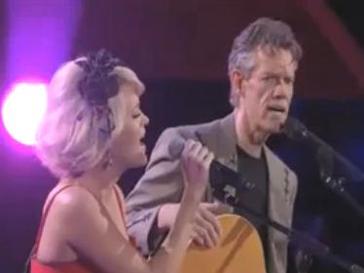 I wonder what the lyrics to the song would be if country crooner Randy Travis were to write a song about his latest arrest. The incidents would certainly make for one sad country song.

The 53-year-old singer was charged with driving while intoxicated after the country crooner crashed his car in Texas. Oh yeah, he was found naked and was quite abusive to police when they arrived. His mug shot will be another of those celebrity classics for sure! As reported in upload.wikimedia.org.

His bad attitude also garnered him charges for felony retaliation and obstruction charge. Here's how it went down. When police arrived at the scene around midnight, Travis was lying naked in the street, with his busted up 1998 Trans Am off on the side of the road in a pile of construction debris.

When police tried to get him into the squad car he threatened to kill them. He refused sobriety tests.

This is Travis’ second alcohol-related arrest this year. He was charged in February of this year with public intoxication after being spotted in a vehicle parked in front of a church about 20 miles from where the entertainer lives.

Travis blamed this incident on a fight with his girlfriend. It sounds to be like he has a drinking problem and needs an Texas DUI class and counseling ASAP.