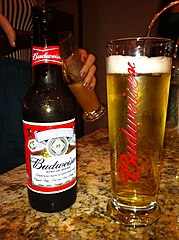 Baseball may be America’s pastime, but the Super Bowl is its “grand daddy” athletic event. NASCAR’s Sprint Chase, the World Series, March Madness, Nor the NBA Championships live up to the hype and world-wide exposure and interest that the Super Bowl generates.

When thinking about the Super Bowl what comes to mind? Obviously football and funny commercials. How about alcohol? While many watch the big game to watch the men in uniform beat the snot out of each other, there are millions who tune in for the commercials.

Do you know who the biggest advertiser is on Super Bowl Sunday? If you are reading this blog, and are intelligent, I am sure you have guessed it has to do with booze. The biggest advertiser is Anheuser-Busch. During the last five Super Bowls the brewing giant has spent a whopping $149 million on advertising. That huge wad of cash was spent to purchase 4 minutes and 30 seconds of air time during the big game!

Some of the best-known commercials involve the Budweiser Clydesdales which now even get their own Super Bowl betting prop (how many times will you see the Clydesdale’s hooves) Bud Light is an official NFL sponsor.