How High Will Broncos Fans Get During the Super Bowl? 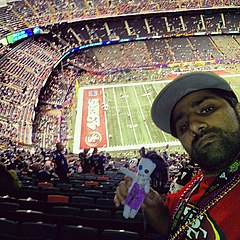 The pundits have had a field day discussing marijuana in relationship to this year’s Super Bowl. The primary reason is that these are the only two teams in the National Football League who play their home games in a state where marijuana is legal for recreational purposes.

If you have been on another planet recently, you might not have heard that beginning last month weed is now legal in both Washington and Colorado.

This year’s epic game will pit the Denver Broncos against the Seattle Seahawks. It should be an interesting battle between the NFL’s best offense, Denver, and its best defense, Seattle.

A side bar to this is that the NFL has made mention that it would consider allowing players to use medicinal marijuana. How do you feel about this?

It has been estimated that as many as 60%, yes you read that right, of current NFL players already dose up with cannabis on a regular basis. It is quite surprising that few are busted for the drug. Seahawks cornerback Brandon Browner was caught and has been suspended indefinitely since December.

So, how about the fans? How of many of them plan to get high on Super Bowl Sunday? According to a survey in the Denver Post, not many. According to the survey, only 2% of Broncos fans plan to smoke pot during the game, with another six percent both drinking alcohol and smoking marijuana. A whopping 56% claimed they will stay sober.

Those stats sound like funny math to me. What do you think?