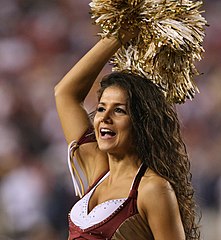 The players in the National Football League certainly find themselves in the spotlight. Sometimes this is not a good thing.  This past off season has been hell on the NFL with record 12 players arrested for driving under the influence (DUI).

At least one of those cases has been resolved.

New Washington Redskins safety Brandon Meriweather was arrested for suspicion of DWI in Arlington, Virginia.  He was pulled over at 3 AM on his way home from a nightclub. This as reported in sbnation.com.

The arresting officer smelled alcohol on Meriweather's breath and performed a field sobriety test, which he failed. After refusing an on-site breathalyzer test, Meriweather was subsequently arrested and spent the night in jail.

Meriweather is not making a good impression on his new employer who just shelled out $6million for the next two years of service.

He is a two-time Pro Bowl selection was a first-round draft pick of the Patriots in 2007 out of the University of Miami.

Hopefully, the NFL will begin to address this issue from a sickness standpoint.  Players need to be mandated to take alcohol awareness classes annually and there needs to be more support in terms of counseling.