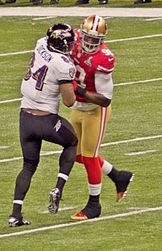 The headline above could apply to numerous professional athletes. From the national Football League (NFL) to Major League baseball (MLB) to the National Basketball Association (NBA) to the National Hockey League (NHL), alcohol abuse is a major problem.

The latest NFL star to get caught for driving under the influence (DUI) is San Francisco 49ers star defensive end Aldon Smith. As reported in www.thenewstribune.com.

Smith will seek treatment following his arrest on September 14th for suspicion of driving under the influence and marijuana possession. After Sunday’s loss to the Colts, Smith apologized and acknowledged he will get help, but didn’t field questions.

Smith started for San Francisco and had five tackles in a 27-7 loss to the Colts, two days after he was arrested and jailed early Friday morning after his truck hit a tree.

Smith is a key pass rusher and sacks leader for the 49ers third-year pro, who turns 24 on September 24th.

Miller was caught trying to manipulate the NFL’s drug-testing system, which led to a six-game suspension that could have been longer.

These players have such tremendous God-given talent. Their careers are so short and so fragile. I cannot fathom how they cannot surround themselves with people that keep beating home these facts. Can they make their millions and stay sober?