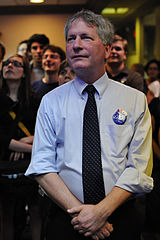 Not one but both candidates for the mayor position in Gainesville, Florida have been arrested for driving under the influence (DUI) of alcohol. Unfortunately for the incumbent, his DUI occurred two days after the initial election resulted in a runoff.

Bad Timing! As reported in www.gainesville.com.

Two days after voters sent incumbent Mayor Craig Lowe into a runoff against Ed Braddy, Lowe was arrested on suspicion of DUI. With Braddy having garnered the most votes in the March 19 general election, the timing could not have been worse for Lowe.

Ironically, Braddy, was arrested for a DUI six years ago. However, his incident seems to have been forgotten as he easily went on to win the runoff.

There were differences of opinion on whether the DUI arrest cost Lowe the election or whether Lowe squandered a chance to recover from having been arrested.

Lowe did not give himself the best chance at surviving his mid-election misstep. Although Lowe issued an apology the evening of his arrest shortly after being released from jail, but it came off as half-hearted and insincere. Some members of his own party thought he might still be intoxicated when he was apologizing. Many saw the apology as evasive.

Lowe has admitted recently that he has a problem. I hope that he takes a 30 hour alcohol class online and seeks counseling. One thing I know is that the public is very forgiving. There is a good chance Lowe could wind up back in office again someday. Don’t believe me, just as former Washington, DC mayor Marion Berry (he was caught doing crack with prostitutes while in office and was re-elected after the incident)!