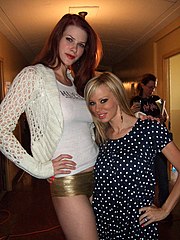 Some ramming occurred at a Los Angeles, California strip club. No, it did not occur in secret in some back room. Instead it happened right out in public, in the parking lot.

Terrence Conrad Meeks was charged with drunken driving after he smashed his BMW into two men standing outside a strip club, leading to leg amputations for both victims. As reported in www.sfgate.com.

The 40-year-old Meeks was leaving the strip club at about 3:30 a.m. when he rammed the men, pinning them against a Mini Cooper.

One victim lost both legs below the knee, the other had his right leg crushed and amputated. Both victims remain hospitalized. He faces up to five years in prison if convicted.

Do you think he wished he had taken a taxi? I hope Meeks takes a thorough DUI class and gets good counseling for the psychological trauma he undoubtedly will face after injuring two fellow human beings so seriously.