British Women Could Benefit from a 10 Hour Alcohol Class 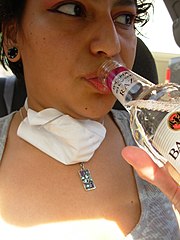 Why do young British women who hold good, upstanding jobs, get dressed up all trampy and get totally bolloxed on weekend? This is the third in a series of blog entries looking at the drinking habits of today’s young, British professional women.

Some of these young women think they are having a quiet night when they drink three shots of peach schnapps, cider and three shots of Jagermeister (during a drinking game called I Have Never). They think they are still sober after all that booze. A few minutes later they find themselves being punched out with no recollection as to why. As reported in www.dailymail.co.uk.

One admits that she does embarrassing things like kissing random men on the street and fornicating behind a chicken coop, yet they continue to tramp out to the bars week after week.

Other women, showing no concern lift up their miniskirts and urinate on the street, cussing at gawking passersby. My grandmother certainly would be shocked by this behavior.

It would be easy, perhaps, to explain away this phenomenon as young women letting off steam after a monotonous week on the factory floor. Boozy Saturday nights have, after all, long been part of working-class culture in cities such as Newcastle, Leeds, Cardiff and Glasgow.

Do you think this is rational behavior? Do you think these professional women are just blowing off steam? We will look to answer these questions in follow up blogs on the subject.