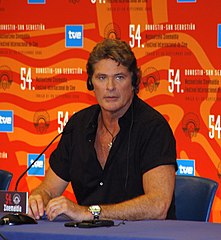 They say the apple does not fall far from the tree. Who of us can forget the alcohol-related incident that became public knowledge surrounding David Hasselhoff?

One of the biggest stars in the world, and idolized in Germany, Hasselhoff was caught on camera in a drunken stupor back in 2007. Hasselhoff was captured shirtless on the videotape in 2007 in a drunken tirade eating a cheeseburger. Hoff’s oldest daughter, Taylor Ann taped it in a Las Vegas hotel room and begged her father to stop drinking; the now infamous video went viral. As reported in perezhilton.com.

Now it appears the Baywatch and Knight Rider star has company – his 20-year-old daughter Haley. Just after Christmas, Haley was arrested for speeding while being under the influence, and now, is being charged with a DUI!!

If she's found guilty, she's looking at spending up to six months in jail.

As I mentioned the apple does not fall far from the tree. In addition to her father’s poor decision with alcohol, Hayley’s mom, Pamela Bach, Hasselhoff’s ex-wife, was arrested twice for DUI in 2009 and 2010. She was sentenced to 90 days in jail and had to wear an ankle bracelet for six months which was used to detect if she had alcohol in her system.

I am not sure if you recall, but the Hasselhoff’s had a reality show on A&E. Like most reality shows, it was an abomination. It followed David and his two daughters, but was canceled after only two episodes in December 2010.

How bad does a reality show have to be to last only two episodes?

Hopefully, Haley will get a good alcohol class and decide to abstain from the consumption of fermented beverages in the future.