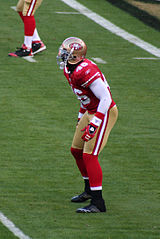 I have to admit that it is not often that I write a blog about driving under the influence (DUI) where a player from the national Football League (NFL) is a principle character and it is a positive message. I am always happiest when it is.

The tight end of the Tennessee Titans, Delanie Walker is pledging his support for stricter laws for convicted drunk drivers. As reported in www.rantsports.com.

Why is a young NFL player so interested in DUI laws? Unfortunately it is because he has first-hand experience with tragedy involving DUI behavior.

Walker, formerly with the 49ers, lost his aunt and uncle when an alleged drunk driver crashed into their vehicle the morning after Super Bowl XLVII at the Superdome.

If the bill passes, a mechanism that requires a driver to have a legal blood-alcohol content level before the car will start. Repeat offenders are required to use the device only after they have been caught driving with a blood-alcohol level of .15 percent or greater, though the state’s legal limit for driving is .08.

It’s always great to see athletes using their status for positive things. Far too frequently athletes use their status to manipulate the legal system, and often get breaks that normal folks wouldn’t get. Walker is correct when he says that this new law doesn’t discriminate. DUI offenders are DUI offenders, there’s no middle ground.

Right now, I am happy that a young man like Walker is using whatever fame or influence he has, to influence others to do the right thing.