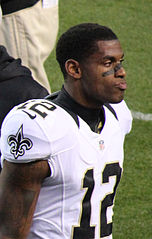 If I tried hard enough I blog about a celebrity in trouble with drugs or alcohol every single day. The fact is celebrities get in trouble a lot, and there are way too many people out there with cameras and video recorders to catch it on tape.

Is there ever a silver lining when a celebrity gets a DUI? The answer is a resounding yes. Here is, hopefully, a little silver lining.

Sounding contrite and determined to atone for his DUI, New Orleans Saints wide receiver Joe Morgan said he is working hard to win a starter's job in training camp while dealing with the fallout from his arrest over Memorial Day weekend.

Morgan is currently enrolled in Stage One of the NFL's substance abuse program and likely will require him to undergo random testing under terms of the Collective Bargaining Agreement.

In the meantime, Morgan is going about his business in training camp, battling Nick Toon, fifth-round draft pick Kenny Stills Jr., special teams captain Courtney Roby and others for the third spot on the depth chart behind veteran wide receivers Marques Colston and Lance Moore.

Morgan is determined to let the incident be a wake-up call that he needs to be smart. Part of being smart is understanding the situation and staying away from alcohol and drugs and DUI behavior.

I hope he continues in his alcohol class and stays focused on his life, his health and his sobriety.