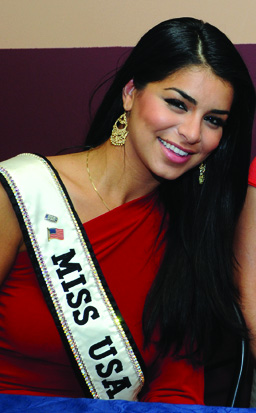 In a perfect sign that beautiful people suffer from the same addictions and afflictions we all do came the story last year of the most beautiful woman on the planet being arrested for driving under the influence (DUI) of alcohol.

Of course I am talking about the ravishing Rima Fakih, the first Arab-American Miss USA.

The 26-year-old Rima was Miss USA 2010 and according to christianpost.com, was arrested in Michigan under suspicion of drunk driving. It is nice to see someone admitting their guilt as Rima’s plea admits that she was driving while visibly impaired.

She was convicted of driving while visibly impaired, a much lesser offense than the other charges Fakih faced in her DUI trial. The beauty queen avoided charges of drunken driving, careless driving, and having an open container of alcohol.

In Fakih had been convicted of misdemeanor drunk driving, she could have served up to 93 days in jail.

At the time of her arrest, Fakih was traveling 30 miles over the speed limit when police officers found an opened and half-emptied bottle of champagne in the car.

She was totally hammered when pulled over with a breathalyzer test showing her blood-alcohol content at 0.19, more than twice the legal limit.

Hopefully Rima will take an Michigan DUI class and seek counseling for a possible problem with alcohol. I would advise her to steer clear of alcoholic beverages in the future.