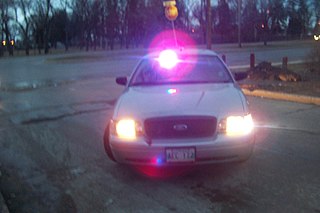 The scary part of people driving under the influence of alcohol or other drugs is that they usually do not get caught. It has been estimated that for every DUI arrest, a driver has operated his vehicle 400 times under the influence.

One sure-fire way to get caught is to run into a police cruiser! As reported in www.ksl.com.

A man who police say has a history of DUI arrests was taken into custody after he smashed into a police officer's patrol car. Of course the incident occurred in the middle of the night- about 2 a.m.

The police officer had just pulled over to help another driver when he looked in his side mirror and saw a pickup truck in his lane was about to hit him. The truck smashed into the driver's side of the police vehicle, causing extensive damage to the door and front end, and kept driving.

The officer was taken to a local hospital where he was treated for a shoulder injury and later released. Terril James Reeves then tried to flee, but his truck broke down about a mile later. The driver tried to get out and run but was arrested a short time later.

The arresting officer detected a strong odor of alcohol on the driver's breath, and Reeves also failed field sobriety tests. He was arrested for investigation of DUI, leaving the scene of an injury accident, and driving with no insurance and on revoked registration.

This is not his first run-in with the law. In 2008, he pleaded guilty to DUI in Salt Lake Justice Court, and in 2007, Reeves was convicted in West Valley City Justice Court of failing to remain at the scene of an accident.

There is no doubt Reeves is in dire need of alcohol treatment. The first intervention could be a 24 hour online alcohol class and some counseling.