Could Alcohol Classes Have Saved Hotels? 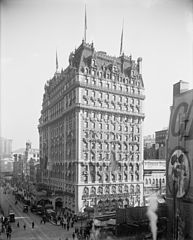 Today we continue to look at some interesting facts about the Prohibition Era in America. If you missed previous installment of the onlinealcoholclass.com blog, I encourage you to go back.

In the last couple of blogs we discussed speakeasies, both how they still managed to sell alcohol and then became targets of shutdown by one incorruptible Prohibition officer names Emory Buckner.

Buckner had become success in shutting them down by placing a padlock on their doors, a lock that could be kept on for a full-year without a trial, however, speakeasies opened new "secret" entrances or moved to another location.

Hotels did not have the ability to "just move". The famous Knickerbocker Hotel went under as did the Manhattan Hotel (where the Manhattan cocktail was first created).

Buckner’s padlocking policy proved so successful in New York, that soon it was being used all across the country. Interestingly this policy included a giant redwood tree in California inside which a still was found to be operating.

Ironically, Buckner himself did not believe in Prohibition and admitted he enforced it because it was the law, not out of any moral conviction. He admitted that he had often imbibed before the law and thought it was a terrible mistake.

So, the many who enforced the Volstead Act did not believe in it, nor did the man whose name was attached to it, Andrew Volstead.