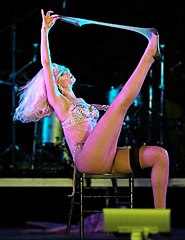 Am I the only one who finds it ironic that a stripper drives a Hummer?

A Las Vegas strip club dancer is facing a felony charge of driving under the influence after a weekend crash that killed a man and injured a child in his car. As reported in www.sfgate.com.

Shauna Diane Miller, a 26-year-old stripper from Las Vegas, was being held on a charge that could get her up to 20 years in prison and a $5,000 fine.

Miller was driving a maroon 2003 Hummer H2 that plowed into a 1997 Ford Escort less than a mile from White's apartment and from the Spearmint Rhino.

The 33-year-old father was pronounced dead at the scene. A 2-year-old boy in a child seat received scrapes and bruises. Miller told investigators she drank two beers at the club and had taken the anti-anxiety medication Xanax (non-prescribed) the night before.

Miller is also a liar. She told police she hit the brakes but couldn't avoid White's car as it turned in front her vehicle. However, a crash reconstruction team determined that White's car wasn't turning, and that the Hummer didn't skid before hitting it.

This is a tragedy that never should have happened. We all wish Miller would not have chosen to drink and drive. She should seriously consider getting well educated.